What's a decent, cheap charger to buy for my G1 volt?

Joined 5 mo ago
·
22 Posts
I really have no idea what I'm looking for here, or what a reasonable price to pay is, and I haven't had any luck finding a used one locally.

I'd like to get 1-2 chargers, ideally that don't cost a fortune, and it would be nice if they could do both L1 and L2 charging with just a plug adapter.

I searched a bit but a lot of the posts for charger recommendations are old and no longer available or can't be had here.

Joined Jun 12, 2018
·
3,244 Posts
I had a new Quickcharge EVSE, new still in box when I bought my Volt, used at a Honda dealership. It had a pigtail in it that I never use. I've used it now for 3.5 years. I installed a rocker switch in line so usually have it isolated when not charging. I don't keep the Volt connected except when temps near freezing for easy precondition and it seldom gets hot enough in summer to bother. It has gone through several power outages including two last night due to snow on trees knocking them onto power lines. So far so good. They're around the $200 mark.

Joined 8 mo ago
·
60 Posts
I got a used Level 1 for $60 on Facebook last year. It came dirty and with a broken latch but still works fine. It was a charger to a BMW i3.
M

Joined Feb 25, 2021
·
912 Posts
This is what I bought but I mounted it inside a rainproof electrical box. So far it's been great. The wire insulation is also very pliable even at 10F. 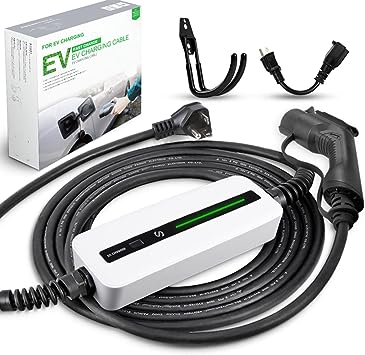 After being displaced by an EF4 tornado my brother no longer has a garage to charge his Volt. Instead he usually leaves his car charging with me at the rented workshop where I was displaced by the same tornado. My car was carried off and crushed under a tree so we have to share the Volt for now.

My daily routine is to first bring him his car and have my breakfast/shower there (can’t do either at the workshop), which obviously uses part of the range. When he needs to go to work he drops me off at the workshop and doubles-back, using up most of the electric range. That’s not ideal.

The temporary place he is staying would be OK with him topping off the car there but not with full daily charges, so I need to build a cheap EVSE to use there. This way I can recoup the lost range while I eat/shower. He’ll also be able to drop me off at my job or the workshop early then return “home” to top off before commuting to work.

My make-shift ultra-budget EVSE is not quite done but so far it’s pretty cheap:


That J1772 Type 1 was actually local to me. The seller used to have a Volt and it came from his OpenEVSE… which is what I would be doing if circumstances didn’t leave me with an ultra-low budget.

The “control board” appears to be the same ClipperCreek Gen2 board from the late Volt/early Bolt portable EVSE. Should wire right up! I added it to my Watch list then got an offer for that price. Comparing it to the same board from an AmazingE 16A portable, this is likely a GM spare (has GM firmware and glued components).

The water-tight enclosure is still hung up in Shanghai’s lockdown so I might just mount it all to a board temporarily. Hopefully my cable glands will fit with this cable and enclosure but, if not, I can add some later when the budget permits.

I already have a scrap of 10-gauge Romex around so I will probably hard-wire it for now and convert it to a portable EVSE later.

Without that enclosure I was well under budget.

The Tesla adapter is meant to give us improved access to free public charging. For example, there is free charging at a hotel a few miles from where he works. He can’t leave early and expect to charge close to his destination because often the only J-Plug is occupied. At least one of the Tesla Destination EVSEs in the same parking garage is always available.

With that reasoning I also got a cheap salvage store eScooter with claimed 28 mile range (closer to 15) so we can leave the car at a public charge station or go separate ways in a pinch.

Edit:
When I started this post my intention was to share my ultra-budget method for anyone who might need to do the same for an EVSE or two, but it seems that the seller suddenly stopped listing those cheap control boards. Oh well. Maybe they’ll be back soon. The listing does still say “2 Available.” There are probably other cheap control boards you could find/use too.

Now that really is a good deal!

CZroe said:
Now that really is a good deal!
Click to expand...

jayoldschool said:
Yes, it's just a rebranded good old Duosida. They work great, are economical, and do 120/240 at full amps with no issue. I have two. At this price, it's cheaper to buy from NAPA than to order direct from China like we used to.
Click to expand...

Absolutely same Level 1/2 Duosidas. We have two working well going on for 6 years. Great price here and even comes with 120 adapter for charging at level 1 if necessary.

Just make sure 240 end matches your 240 outlet layout. If needed you can get a 240 outlet adapter.

marcusm said:
Absolutely same Level 1/2 Duosidas. We have two working well going on for 6 years. Great price here and even comes with 120 adapter for charging at level 1 if necessary.

Just make sure 240 end matches your 240 outlet layout. If needed you can get a 240 outlet adapter.
Click to expand...

NEMA 5-15 is the standard 3-prong outlet that is ubiquitous in every American household with the 5-20 variant being popular in new construction. NEMA 6-20 is not very common, but there’s still a good reason to use it. I’ve only seen it for window unit air conditioners and, weirdly, a water heater… but it’s what I chose for the EVSE at my workshop and is what I would’ve chosen if I were designing a 16A portable like this too.

That’s because it’s safe to adapt and also very easy to convert almost any standard 120v NEMA 5-15 or 5-20 outlet to 240v NEMA 6-20 for Level 2 charging. The wiring for any NEMA 5-20 should handle 20A, just make sure it is the only outlet on the circuit before you swap in a 6-20. From there you just swap in a 20A 240v breaker at the electrical panel and connect the same wires to it. All you need is that breaker, the outlet, and a screwdriver. Easy, but look up a proper guide or something where they will cover cutting the power and what not to touch.

In my case I found out the hard way that my rented workshop had 240v wired to a NEMA 5-15 (fried some work lights). The lease said I couldn’t do any 240v wiring so I repurposed that one by changing the outlet to 6-20. That needed to be done anyway so no one else fried 120v equipment. I got some cable from Lowe’s with a NEMA 6-20 plug and assembled a pigtail that goes to our AmazingE EVSE. That’s 16A max, just like this Schumacher/Duosida EVSE, and the Gen1 Volt only uses 12A anyway, so 6-20 is perfect.

Another reason to use 6-20 for a 16A EVSE instead of a more commmon dryer plug is because it never hurts to adapt a lower-amp device to a higher amp source. You might scare a few electricians or facility managers if they see you adapting the other way from a 30 or 50 amp dryer plug… at least until they realize that the Schumacher/Duosida unit is 16A max.
1 - 14 of 14 Posts
Join the discussion
Continue with Facebook
Continue with Google
or sign up with email
About this Discussion
13 Replies
10 Participants
Last post:
CZroe 4 d ago
GM Volt Forum
A forum community dedicated to Chevy Volt electric car owners and enthusiasts. Come join the discussion about hybrid performance, modifications, classifieds, troubleshooting, maintenance, reviews, and more!
Full Forum Listing
Explore Our Forums
Chevy Volt News, Events Generation 1 Chevy Volt (2011-2015) Hybrid and Electric Vehicle Competitors Generation 2 Chevy Volt (2016-2020) ? Buying, Selling, Tax Credit, Fees - Chevy Volt
Recommended Communities