Joined Aug 18, 2014
·
2,634 Posts
We replaced my wife's minivan with a Clarity PHEV. Great car, fits 5 comfortably. Don't worry, I am keeping my Volt but need a larger family vehicle as well. 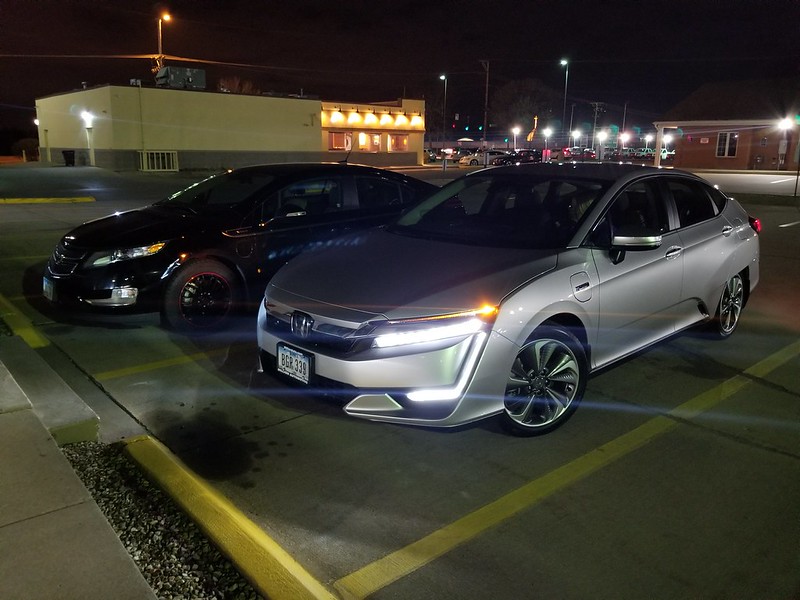 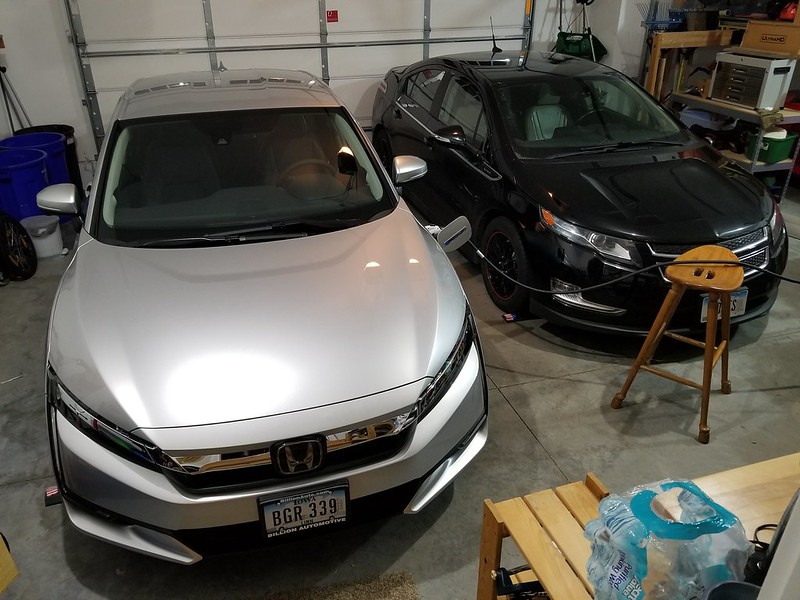 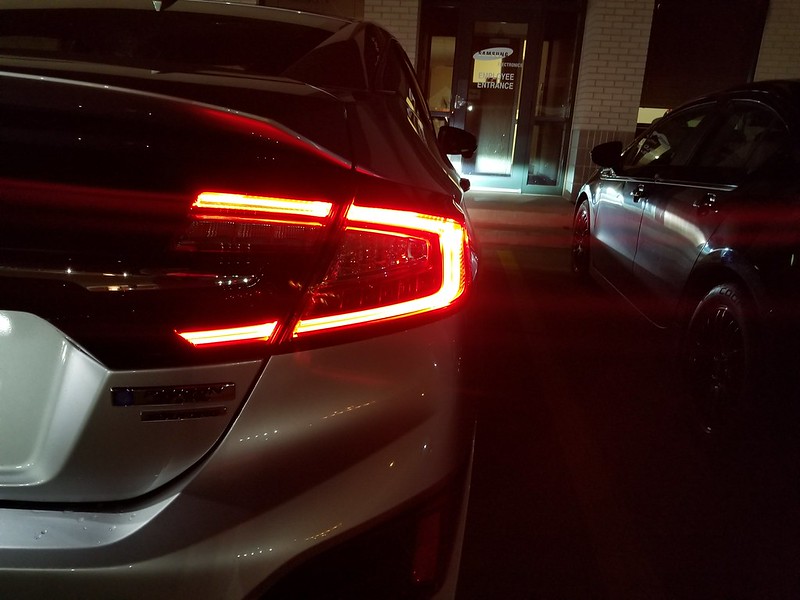 So far, I really like how it drives. I didn't realize it has something very close to autopilot. It has a bunch of safety features lumped together and called Honda Sensing. It will steer the car to keep it between the lane markings. It probably lacks some of the features of AP though. My surprise is it did more than I thought, I didn't think it would actually steer the car down the road. It also has stop go ACC for traffic jams.

The dealer didn't have it charged of course (technically, the Honda side of the dealer doesn't even have a charger, had to go to GM). They put an hours worth of charge in it which was enough for me to get a few miles EV on my way home.

Really nice driving car, really love the size though the footprint is only a bit smaller than the minivan. It is a pretty large car. The pic in my garage, it isn't back as far as the Volt, so it isn't as gigantic as it looks, but still a lot larger.

The memory and power adjustable seats are a nice touch. I love all the LED lighting. The looks of the car are... special?... I don't dislike them, but some of the lines are a bit odd. Not bad though, just different I guess.

My short drive back from the dealer (40 miles) netted me 44 mpg varying from 77 mph to 60 mph on the highway (I reset the trip meter after battery ran flat after about half the trip, same as I do in Volt to see engine only mpg). Regular gas, so that is nice compared to my Gen 1 Volt.

Overall gas savings should be huge for me, my minivan averaged 19 mpg over 79k miles. I imagine this will average up to 10k miles a year EV and 5k gas, so go from maybe 790 gallons down to 125 gallons plus electricity. Maybe save $1400 a year. Not going to pay for itself, but still use a lot less energy for me.

The infotainment system is a bit sketchy on it, slow to respond, but nice it has Android Auto and the built in Garmin Navigation software App is nice if don't want to use Android Auto.

Overall, the car is maybe tuned towards a general consumer that wants a great well equipped car that doesn't want to really know about all the electrical features. That is Honda tries to educate you enough to plug it in, otherwise just drive it like a normal car.

Regen braking is lacking relative to my Gen 1 Volt in low. I probably won't bother using it. Again, just drive it like a car. I believe the brake pedal is blended so it regens when you press that like the Volt does too. Sport and max regen was not impressive though, at least in sport mode it will hold your regen setting between stops.

Great spacious car, not as great if you really insist on it being EV 100% of the time before using gas, but you still really will see a gas savings driving it given the large battery and decently powerful setup.

Joined Oct 22, 2010
·
6,424 Posts
Congrats. Great write up. Will be interesting to see how it works out. Great size I think. My kid has a Volt for commuting and Honda Accord for traveling.

I don't understand the diff betweene RDM and LKAS but I'm sure there's some thing too it.

Aside from the looks (why didn't they just convert an Accord???), the Clarity PHEV is actually the biggest competition to the Volt (specwise). No other PHEV/EREV even broke the 30 EV mile barrier, let alone the Volt's 53, and it's basically the same price or slightly cheaper.

Though Honda only plans to sell 20k copies a year, selling it in semi-compliance numbers. Then again the biggest sales year for a PHEV was only in the low/mid 20's, so perhaps that's a decent number to put out there.
V

Joined Aug 18, 2014
·
2,634 Posts
Considering this is one of the first in Iowa, out the door was just MSRP (37,490 inc delivery) + tax/title/license. Plus, they gave me what I wanted for trade on my van (surprised they didn't low ball me too much there). This is when comparing MSRP is not accurate as GM will generally give you more off MSRP when negotiating. My point is the Clarity and Volt are about the same price on the sticker, but you will probably pay $4 or $5k more for Clarity.

My hunch is when the fuel cell plans weren't panning out they decided to make the EV and PHEV version of the Clarity to get more use of the chassis. Hence the tall back for the fuel cell tank and the styling to make the fuel cell version more distinctive carried over to the two.

The back wheels should help air drag significantly with the top of the tires covered, and that side air vent in front of the rear wheels is functional, it directs air over the front surface of the wheel, my guess is something to improve drag as well.
G

Joined Jun 3, 2008
·
1,315 Posts
One thing that it has that the Volt doesn't have is that the following equivalent modes:

Can all be enhanced into Sports Mode.

In the Volt, you can't have Sports mode when it is in Hold or Mountain but you can always slam the accelerator to achieve the same thing.

So I like the Honda Clarity's more logical implementation of the various modes.
V

Econ refers to both climate and motor/engine settings and makes it harder to start the engine. Sport makes the engine run more and uses it for acceleration, and HV is hold mode (or hold and charge to 60% or so). Sport is not particularly sporty, I imagine normal mode will get used most of the time.

I found how to know when the engine will start. Around the speedo in a semicircle it has a blue bar and a white needle that indicates power requirement. If the white needle moves past the blue bar the engine starts. So it should be easy to adjust driving accordingly.

Charging Modes:
The only option is a timer that can be set (charge to full, or charge to end time, both starting from start time). So time of day charging could be set here. The Volt has many more options for charging.

Judging from the past two years of complaining, you just sold about a thousand cars.

hellsop said:
Judging from the past two years of complaining, you just sold about a thousand cars.
Click to expand...

Haha no doubt and the power seats!

No moonroof though, blarg!

Do you find your knee bumping against that center console thing? It sort of floats ala the previous generation Prius. I feel like I'd bump my knee into it all the time.

hellsop said:
Judging from the past two years of complaining, you just sold about a thousand cars.
Click to expand...

What I REALLY like ALOT about this car is that SAFETY IS STANDARD. You have to go Premier to get ACC in the Volt.
V

Joined Aug 18, 2014
·
2,634 Posts
Moonroof is a no go for me in most cars, like the Volt already has too little headroom without one, if there was one it would not be possible for me to drive it or ride in it. The Clarity gives me spare headroom, maybe 1 or 2", the Volt my head rubs. What I do like are the new glass roofs, like in the Tesla, as this lets the light in and actually increases headroom. It really surprises me the Clarity doesn't offer one, as it is a Honda/Acura signature to force a moonroof on you in the premium packages.

I will have to check the knees on the console later, this usually isn't a problem for me as I have relatively short legs and very tall torso (hence the headroom issue).

A requirement from my wife along with being a plug-in was the safety features: minimum of adaptive cruise, lane departure warning, and automatic braking. The one it is missing is blind spot detection though. Was hoping for that one, but oh well, not a deal breaker. The Clarity was about $10k cheaper than the Pacifica Hybrid (PacHy) with the safety features.
S

firehawk72 said:
What I REALLY like ALOT about this car is that SAFETY IS STANDARD. You have to go Premier to get ACC in the Volt.
Click to expand...

the technology is too new and not always reliable. it certainly is not in the same tier of safety equipment as ABS or airbags are.
V

Shivetya said:
the technology is too new and not always reliable. it certainly is not in the same tier of safety equipment as ABS or airbags are.
Click to expand...

ABS in itself hasn't made much difference in safety. However, it is a critical component of modern safety systems, where you have ABS, electronic brake force distribution, dynamic stability control, lane keep assist, adaptive cruise, etc all working together to create a much safer car. I think the modern safety features like Honda Sensing, will produce largest increase in safety beyond seatbelts and stronger cars.

I am sure all cars will be mandated in having similar driving aid packages within 10 years (all manufacturers have already agreed to do so by 2022).

Joined Jul 3, 2014
·
1,285 Posts
Interesting. Actually doesn't look half bad in silver. Honda should use your pics and not their standard corporate photos--looks pretty frumpy in the Honda photos, but your pics are good.

if you can,take a pic from the back and maybe at an angle so we can get an idea of the back of the car.
V

Joined Jan 26, 2011
·
21,113 Posts
So you are now a two PHEV family? Nice! I think Honda is definitely an option for those who want some feature or size that the Volt lacks. And if GM kills the Volt in 2020 (?), well then this could definitely go on the shopping list as a replacement option.
P

Joined Sep 8, 2012
·
160 Posts
What do you think about the plastic vanes on the wheels? I hate them with a passion. I wonder if they can be removed and what the wheels look like without them.

Also has anyone found a Honda centric forum where the Clarity is being discussed?
P